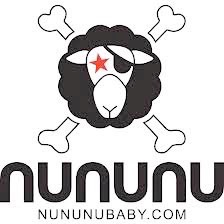 nununu creates an alternative fashion line to typical children’s clothing. it goes against fashion’s narrow set of beliefs, and breaks free from over-stimulating kid clichés. by introducing children to the wonderful mystery of minimalism, nununu lets kids shine at every stage with a kickass cocktail of attitude and a big sense of humor.

the nununu image conveys an air of detachment. it is never cute or sweet, but always ready for the challenge. the brand operates in a way where instead of defining differences it dissolves them, blurring out any boundaries and making divisions completely insignificant.

led completely by their intuition, co-owners and designers iris adler and tali milchberg created children’s clothing collections that broke stereotypes and dodged accepted norms. their need for a basic dna and a unisex offering in kids fashion, created a global trend that is now an inspiration worldwide. driven by an agenda that defies the traditional dichotomy of boy/girl clothing, iris and tali showed that in the world of real individuals not everything is so black and white. for nununu, what really matters is the freedom of individuality and creativity, especially at a tender age.

this fighter-leadership brought about something disruptive in fashion, which erased traditional definitions and gave young people the freedom to choose who they are. today, ten years later, the eccentric and unconventional style of nununu has become a natural element in children’s fashion everywhere. iris and tali created a revolution.

nununu dresses the children of the future, enabling them to bring out their inner essence, highlighting their creativity, helping them fight injustice, and letting them connect to their own personal creativity so they can bloom forth in a world where they are the ones that determine its limits.

nununu offers children the space and time that lets them bring the future.

This is a restricted content, you must be a registered retailer to view it

This section is reserved to registered retailers only.

If you wish to become one of our brand’s retailer, please fill out the contact form here in order to have your account registered. Please select the Wholesale button under “What is your inquiry about” and select all the brands you are interested in representing.